How Was The Period Of Left - Wing Trade Unionism?

Advertisement!
1925-1934 : PERIOD OF LEFT-WING TRADE UNIONISM -
This era was marked by increasing militancy and a revolutionary approach. It also saw multiple split-ups in the movement. Leaders like N.M Joshi and V.V Giri was instrumental in moderating the movement and further integrating it with the nationalist mainstream.
AITUC split up multiple times paving way for the formation of organisations like National Trade Union Federation (NTUF) and All India Red Trade Union Congress (AIRTUC). However, the need for unity was felt and they all merged with the AITUC in the next phase.
The government was also receptive to the trade union movement. Legislations like the Trade Unions Act, 1926 and the Trade Disputes Act, 1929 gave a fillip to its growth. It bestowed many rights to the unions in return for certain obligations. This period was marked by the dominance of the left. Hence, it may be referred to as the period of left-wing trade unionism.
1935-1938 : THE CONGRESS INTERREGNUM :
This phase was marked by greater unity between different unions. Indian National Congress was in power in most of the provinces by 1937. This led to more and more unions coming forward and getting involved with the nationalist movement. In 1935, AIRTUC merged with AITUC. Different legislations were passed by provincial governments that gave more power and recognition to the trade unions.The approach of Congress ministries was that of promoting worker interests while protecting industrial peace. Reconciliation of labour with capital was seen as an aim, with ministries working towards securing wage rise and better living conditions. However, many ministries treated strikes as law and order issues. They used colonial machinery to suppress it. This led to considerable resentment from the unions.
1939-1946 : PERIOD OF LABOUR ACTIVISM :
The Second World War lowered standard of living for the workers further and this led to the strengthening of the movement. The question of war effort created a rift between the Communists and the Congress. This, coupled with other issues, led to further split in the movement. However, the movement as a whole got stronger due to the compounding issues. This included mass entrenchment post-war and the massive price rise that accompanied it.
Legislations like Industrial Employment Act, 1946 and Bombay Industrial Relations Act, 1946 contributed to strengthening the trade union movement. In general, the movements got more vocal and involved in the national movement.
1947-PRESENT : POST-INDEPENDENCE TRADE UNIONISM -
It was marked by the proliferation of unions. INTUC was formed in May 1947 under the aegis of Sardar Vallabhbhai Patel. Since then, the AITUC has come to be dominated by the Communists. Hind Mazdoor Sabha was formed in 1948 under the banner of Praja Socialist Party. Later on, it came under the influence of Socialists. Bharatiya Mazdoor Sangh was founded in 1955 and is currently affiliated to the BJP.
Post-independence, trade unions became increasingly tied with party politics. Rise of regional parties has led to a proliferation in their numbers with each party opting to create its trade union. However, their influence has been somewhat reduced after the liberalisation post-1991. Issues like labour code reforms and minimum wage remains a political hot potato due to the opposition from the trade union leadership.
Post-independence, India has also witnessed different unions coming together to address a common issue. These include the crippling railway strike of 1974 and the Great Bombay textile strike, 1982. However, such strikes are seen to get less public support post-1991. There is also an increased focus on informal labour. This is due to the particularly vulnerable situation of unorganised labour. All major trade unions have registered an increase in their membership from the unorganised sector. 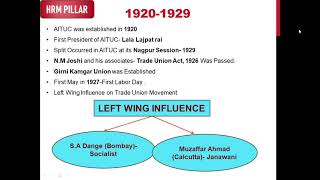 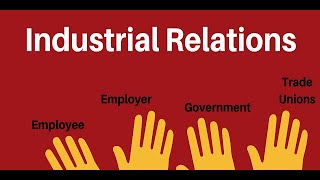 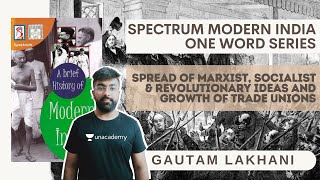 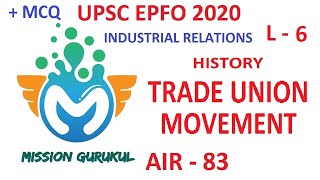 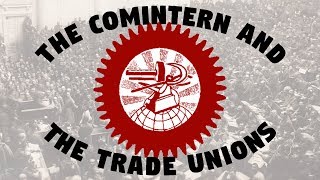 The Comintern and the Trade Unions

Tom Trottier, editor of Socialist Revolution, speaks on the Communist International and their work w 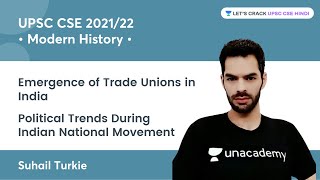 In this session, Suhail Turkie will be teaching Emergence of Trade Unions in India - Political Trend

How did British rule affect the Indian Villages and what are the changes introduced by them in India ?
6 min Reading