What are National Parks and Wildlife Sanctuaries?

The wildlife of India is diverse and its national parks and biosphere reserves are home to many endangered wildlife species like Royal Bengal Tigers and Red Panda, the vulnerable one-horned Rhinoceros and Snow Leopards, and critically endangered Great Indian Bustard, among many other species of flora and fauna.

National parks are the areas that are set by the government to conserve the natural environment.

National parks are areas that aim to protect the natural environment. They are also involved in public recreation and enjoyment activities. In a national park, the landscapes and its flora and fauna are present in their natural state.

India is rich in biodiversity. It comprises about 7.6% mammals, 6.2% reptiles, 12.6% birds, and 6.0% flowering plant species under the Indomalayan ecozone. Many eco-regions of our country like Shola forests exhibit high rates of endemism. The forests cover over the ranges from the tropical rainforest, the Western Ghats, and Northeast India to the coniferous forests in the Himalayan region.

Indian wildlife has around 99 world-recognized national parks in different parts of the country. All these national parks and wildlife reserves have been recognized by the IUCN or the International Union for the Conservation of Nature under the second category of protected areas.

Sanctuary is a place of refugees, where injured, abandoned, and abused wildlife is allowed to live in peace in their natural environment without any human intervention.

It is Said to be India's most beautiful wildlife reserve, Jim Corbett National Park was established in 1936. Nestled in the foothills of the Himalayas in Uttarakhand, this National Park is spread over an area of 1318.54 sq. km. Home to a rich ecosystem the Jim Corbett consists of rolling grasslands interspersed with rivers and valleys. An ideal place for bird watchers and nature lovers this national park in North India is the residing place of the endangered Bengal Tiger. Consisting of diversified flora and fauna this sanctuary in India is home to about 600 different species of plants, over 650 species of birds and animals which includes gharial, elephant, chital, sambar, wild boar, King Cobra, Indian Pangolin nilgai, muntjac, common musk shrew, and the flying fox.

It is Situated in the mighty Western Ghats the Periyar Wildlife Sanctuary is said to be heaven for nature lovers. Set amidst the picturesque surroundings and vast tracts of lush greeneries of Kerala this wildlife sanctuary in South India is the adobe of some of the rarest endangered species in the country. Beautiful as it is this wildlife sanctuary offers enthralling views of nature and includes a host of wildlife attractions like Barking Deer, Dole or Indian Wild Dog, Deer, Mouse, and very rarely, a Tiger. There are also a number of birds that inhabit the Periyar Wildlife Sanctuary which include Darters, Kingfishers, Cormorants and the Malabar Hornbill.

It is Spread over an area of 1412 sq. km the Gir National Park lies in the Gujarat Peninsular region of India. Known to be the only habitat of the world-renowned Asiatic Lion, this wildlife reserve in western India is every nature lovers' dream. Consisting of a seamless blend of valleys, rivers, dense deciduous forests, and swampy grasslands this national park is considered one of the top wildlife habitats in the country. Apart from the Asiatic Lions, this wildlife reserve is also famous for species like; Grey Musk Shrew, Flying Foe, Hare, Hedgehog, Small Indian Civet, Indian Pangolin, Ratel, Porcupine, Fox, and Jackal. The peafowl is the most important bird found here. Kamleshwar Dam provides a large water body for marsh crocodiles, reptiles, and Birds.

It is Counted as one of the most frequented wildlife reserves in India, Sariska Wildlife Sanctuary is located in the Alwar district of Rajasthan. Extending over 800 sq km of vast green milieu and encompassing certain important historical monuments, dating back to the 10 century, within the vicinity of the park this wildlife sanctuary is definitely eye candy to nature and wildlife enthusiasts. The biosphere of this wildlife sanctuary includes rocky landscapes, dry deciduous forests, and hilly cliffs. Sasrika is said to be ethereal for bird watchers with some of the rarest feathered species like Grey Partridge, white-breasted Kingfisher, golden-backed woodpecker, and the Sand Grouse. Some of the wildlife that resides in this sanctuary are; Four-horned antelope, hyena rhesus macaque, leopard, languor, and the jungle cat.

The Ranthambore National Park located between the Aravalli Mountains and the Vindhya plateau is one of the renowned national parks of India. This national park with an area of 392 sq km is famous for its Royal Bengal Tigers that can be seen near the marshes and the lakes even during the daytime.
In the past, this area was a hunting ground of the Maharajas of Jaipur. It was declared a game sanctuary in 1955 and later became a National Park in 1980. Finally, in 1980, it became a Tiger Reserve in India. Ranthambore is also cited as a heritage site because of the pictorial ruins of the fort within the park.

Sunderbans National Park is the undisputed gem in the crown of the eastern part of India. It is situated in the world's largest Delta this wildlife reserve in India spreads over an area of 4264 square km of impenetrable mangrove forests. Bestowed with the title of a UNESCO World Heritage Site the Sunderbans in Eastern India is known to be the largest tiger reserve in the country. Idyllic for bird gazers and nature lovers the Sunderbans is home to species a multitude of species apart from the Royal Bengal Tiger like; Jungle Cat, Flying Fox, Chital, Wild boar, and Pangolin.

Kaziranga National Park is the only natural habitat of the endangered One-Horned Rhinos in India as well as in the world. Located in the Golaghat district of Assam, it is one of the largest wildlife sanctuaries to explore the wildlife of Northeast India. It is also a highly visited park among the top 10 national parks in India. This park also boasts of its number of tigers and other wildlife species. Due to the noteworthy number of tigers, Kaziranga National Park has been declared as a Tiger Reserve forest in 2006. Other wildlife consists Elephants, Wild Buffaloes and Swamp Deer. The park also witnesses a large number of migratory birds during the winters.

It is another sought-after destination in the list of national parks of Madhya Pradesh. Established in the year 1955, this park has gained a lot of attention due to its efforts in saving the rare and almost extinct species of the Swamp Deer, also known as ‘Barasingha’. It is also one of the well-maintained parks in Asia. The other feature of the Kanha National Park is its sunset point called Bamni Dadar. Almost the entire park can be seen from this point. It offers the most eye-catching views of the animals in their natural habitat.

The Bandhavgarh National Park is another enticing name in the list of national parks of India. Located in the Umaria district of Madhya Pradesh, it is one of the largest national parks of Madhya Pradesh. Declared as a national park in 1968, this park has a noteworthy number of Tigers in India.This park also has a significant number of Leopards and Deer. Among all the attractions of Bandhavgarh National Park, White Tigers are the most spectacular.

This park boasts of its 55 species of mammals, 380 species of birds and a substantial number of reptiles and amphibians. Asian Elephant, Indian Rhinoceros, Water Buffaloes, Leopard and Assamese Macaques are the other dwellers of this park. It is also one of the popular destinations for river rafting. It has a large number of rare and endangered species. Assam Roofed Turtle, Hispid Hare, Golden Langur and Pygmy Hod are some of the most endangered species of this park.

parcham #parchamclasses #parchamGeography Hello everyone, in this video we will discuss all the important National parks of India and their states. We will ... 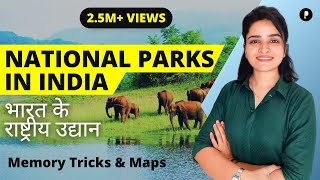 parcham #parchamclasses #parchamGeography Hello everyone, in this video we will discuss all the impo 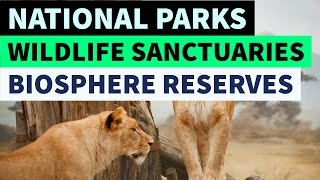 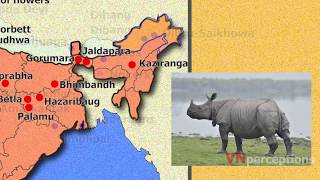 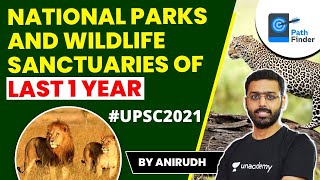 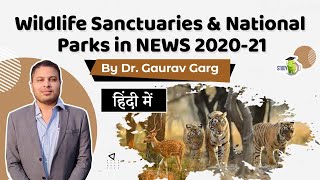 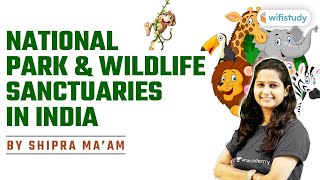