The Saka Samvat Calendar is the National Calendar of India, which is used alongside the Gregorian calendar.

History of Saka Calendar
It was believed that Kushana King Kanishka was the creator of this calendar, which came to be known as Saka Calendar.
The national calendar is based on the Saka Era, with Chaitra having tha first month and normal year of 365 days was adopted from 22 March 1957 along with the Gregorian calendar. The Saka calendar was formed in 79 AD and is based on the crowning of King Shalivaahan in 78 AD, according to a lecturer. The Saka Calender is based on luni-solar reckoning of time. The calendar consists of 365 days and 12 months like the normal Gregorian calendar. Chaitra is the first month of the year beginning on March 22 which is the day after the Spring Equinox. During leap years, the starting day of Chaitra corresponds with March 2.

Vaisakhi, Pongal, and those associated with Sankranti are based on the solar cycle, while other festivals are based on the Lunar cycle and their dates vary on the Georgian calendar, like Maha Shivaratri, Holi, Guru Purnima, Ganesh Chaturthi, and Diwali.

The Vikram Samvat is  also known as the Vikrami calendar which is a historical calendar for the Hindus in India. Vikram Samvat is also the official calendar of Nepal and is named after the king Vikramaditya. This calendar came into focus after the 9th century with the beginning of epigraphical artwork. It marks the beginning of the Vikrama era that prevailed in India and Nepal. It starts at 57 B.C. before the 9th century with Vikramaditya.
The Vikram Samvat has 12 months with each month divided into two phases:
1. Shukla paksha (15 days) – begins with the new moon and ends with a full moon.
2. Krishna paksha (15 days) – begins with a full moon and ends with the new moon.

Division of a year accoording to Vikram Samvat:

The first day of the Vikram Samvat calendar is celebrated after Diwali in Gujarat and Maharashtra. The Vikram Samvat is similar in design to the Gregorian calendar. It has been used by the Hindus and the Sikhs. This calendar system is one of the lunisolar calendars developed by ancient human cultures. It uses the lunar months and solar sidereal years for the division of a year. The Starting mark of Vikram Samvat is from Diwali (October-November).

The Hijri calendar is also known as Lunar Hijri calendar which consists of 12 lunar months and 354/355 days. The Hijri calendar is used to determine the Islamic holidays and rituals such as the annual period of fasting and the pilgrimage time to Mecca. The Islamic year began in AD 622 during which the migration of Prophet Muhammad from Mecca to Medina, known as the Hijra happened. It has 354 days.It is used to date events in many Muslim countries simultaneously with the Gregorian calendar.

The beginning of each month is contingent on the visibility of the moon at the end of the previous month. Once the moon is sighted, the new month commences. Each month starts with a new lunar cycle. Hence, the Muslim Calendar gives only a tentative overview of the upcoming Islamic dates as the start of each month is subject to the sighting of the moon.

The Islamic New Year starts off with the month Muharram.
1. Al-Hijra — Islamic New Year. Marks the end of Mohammad's journey from Mecca to Medina.
2. Eid ul-Adha — Festival of Sacrifice
3. Eid ul-Fitr — End of Muslim Month of Fasting (Ramadan)
4. Prophet's Birthday -- Celebration of the birth of the Prophet Muhammad
5. Ramadan — Muslim Month of Fasting

The Gregorian calendar  was introduced in October 1582. This calendar is named after Pope Gregory XIII and is the most used calendar in the world. This calendar determines the Earth’s revolution around the Sun and spaces leap years to make the average year 365.2422 days long. It is the calendar used in the international standard for Representation of dates and times: ISO 8601:2004. It is a  based on a 365-day common year divided into 12 months of irregular lengths. The Gregorian calendar replaced the Julian Calendar, which had become 10 days out of synchrony with the solar cycle. In October 1582, 10 days were dropped from the calendar.

Months of Gregorian Calendar are as follows:


Festivals according to Gregorian Calendar: 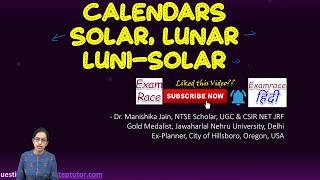 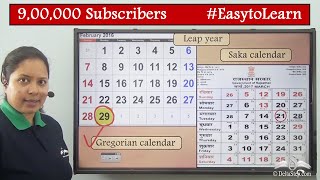 Differences between the Gregorian and the Saka calendar

Register for FREE at http://deltastep.com or download our mobile app: https://bit.ly/3akrBoz to get 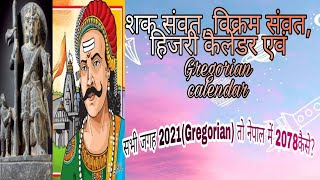 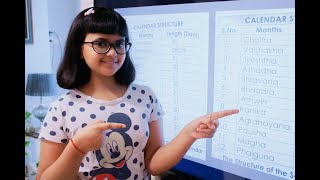 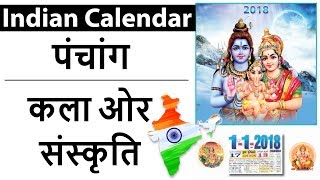 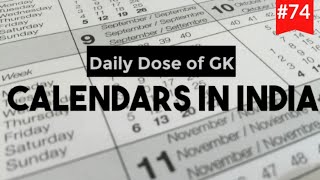 The Indian national calendar, sometimes called the Saka calendar, is used, alongside the Gregorian c